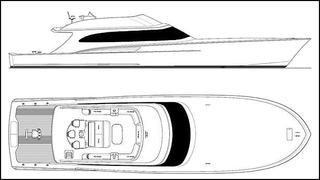 Accommodating eight guests in four cabins, the 84ft version of Blank Check will be built in the same traditional way as her smaller sibling, with cold-moulded fir and Okume bones and fibreglass skin. In the engineroom will be twin 16V-2000 MTUs rated at 2,600hp, so she should have a top speed of around 40 knots and cruising speed of around 35 knots.

With nearly 60 custom builds to date, Jarrett Bay designs their hulls, first and foremost, with performance in mind. Jarrett Bay’s modified-vee hull design uses seaworthy, lightweight materials allowing their boats 'to be faster than other similarly-sized boats with equal or more horsepower, and significantly superior fuel economy than custom and production boats in her class'.