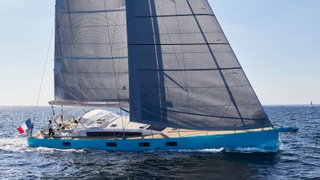 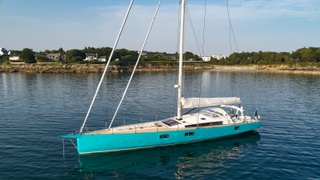 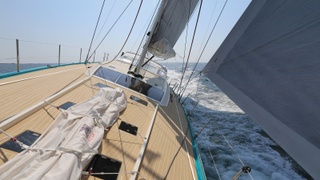 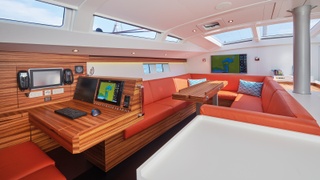 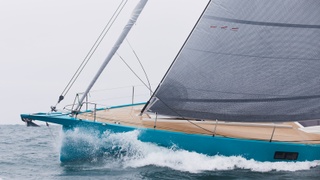 A strong weather system is at work at JFA Yachts’ facilities in north-west France. The key element for a sail may be wind, but too much of it and all manner of undesirable scenarios will occur to any sailor – but especially to the owner of the 22.3-metre Basyc, his voyage to South America just a few days away. With a deep cyclone producing uncomfortable gusts, our day of sailing is relegated to a dockside exploration – but there’s still plenty to see and feel on board this sloop.

Sailmaker X Voiles introduced the owner to JFA Yachts, while Brittany-based design studio Finot-Conq won the contract for the design and naval architecture of the project, which began as a 19.8-metre. “Originally I wanted a 65-foot aluminium cruising boat that was as lightweight as possible to make it easier to handle and control,” begins the owner as we stand in the cockpit. “However, the project grew to 70 foot because I am 63 and maybe one day I will need a crew member to help me, so we included a crew cabin in the front. More basic than that, however, I wanted a boat that I could sail myself with my wife and it was important for me that it be built from aluminium.”

Having owned five boats in his time, the last one being an 18.2-metre Cigale 18 built by Alubat, he knew exactly what he wanted. “My father had an aluminium boat and hit a rock off the coast of Greece, making a dent in the hull that caused no issues for him for nearly 25 years,” he says, emphasising that a composite hull was never an option.

Touring Basyc, there is a striking feeling of size and space in the cockpit, which offers plenty of seating and tables, and can be enclosed from the elements. “I plan on travelling the world on this boat so it was important for me to have all controls close to the helm,” says the owner. “Together with the architect and the yard, we ensured that all rigging was placed clear of this area, keeping all moving parts outside the seating and helm areas.” To achieve this, an arch was built aft of the epoxy glass-infused cockpit, from which the mainsheet is attached, keeping it off the deck.

The base of the arch is hollow, allowing for the stowage of a 3.4-metre tender within the aluminium hull. It is accessed via a hatch on the transom that folds down to reveal a launch area doubling as a bathing platform. Fold-up hatches within the bulwarks either side of the central arch structure provide safe passage to the platform below.

To keep weight down, the composite cockpit, bulkheads and coachroof are paired with a strong carbon mast, boom and standing rigging. Even the deck is a synthetic lightweight faux-teak by Flexiteek. “Reducing weight wherever possible on the rigging is important, and to have carbon standing rigging on a boat like this is unusual, as is the boom with its racing-style carbon construction,” says JFA Yachts’ CEO, Frédéric Jaouen. “As the weight above deck is linked to the lead needed in the keel, light rigging means less lead and therefore helps to reduce pitching.”

Every aspect of this 21.3-metre has been carefully considered and overseen by the owner, and with good reason. When sailing great distances, it is those on board who have to locate and fix any potential issues that arise. “The owner worked closely with our project manager Vincent Balouin and all aspects of the build were overseen by the owner,” says Jaouen. “He even specified the electric systems on board, from controls through to alarms and so on, which is quite a specialist field.”

The electrical set-up includes a pair of Watt&Sea cruising hydro-generators fitted to the transom. The owner believes these will produce a third of his electrical needs, with the remaining power delivered by a 19kW Onan genset and solar panels. When these are combined with an electric cooker and heating system, there is no need for the storage of gas, making Basyc safer and more self-sufficient.

Below deck, we enter the heart of the boat with a full-beam saloon and open-plan galley. It is a light and airy space, thanks in part to windows on the sides and on top of the low- profile coachroof, which is also constructed from epoxy glass infusion. The structure of the saloon ceiling has been left exposed, providing additional head height and helping to keep weight down, as does the use of foam and veneer furniture and honeycomb panelling.

Two en suite doubles aft sandwich the engine room, which houses a 134kW Volvo engine, while the full-beam master is forward of the saloon, allowing the couple to invite family and guests to stay. The interior has been finished with zebrano wood furniture, alongside white lacquered panelling and orange leather seating. “The challenge on the interior was to get the right balance of zebrano with the other materials, as we wanted to create a modern interior and it is easy to lose that when you use too much of this veneer in a space,” explains Pierre Forgia, interior designer at Finot-Conq.

With the weather set to improve, it is easy to see the excitement on the owner’s face for what lies ahead. Transatlantic crossings can test the hardiest of sailors and yachts, but this is what Basyc was built for and she will no doubt deliver a journey of a lifetime.