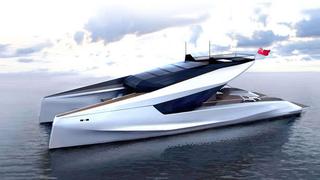 Two iconic French brands – one marine and one automotive – have teamed up to design a new 35-metre power catamaran superyacht concept, Boat International can exclusively reveal.

French yacht builder JFA Yachts reports that the concept, designed with Peugeot Design Lab, was developed “in order to answer new trends on the design market”.

“We were attracted to this project because Peugeot is a French brand big on innovation, and experience with different markets and discovering new horizons,” says JFA’s Gael Douget. “We contacted them in July and they proposed imagining a project for us, so we decided to work together on the growing market of power catamarans.”

The Concarneau-based yacht builder has form when it comes to catamaran construction, and this year launched the 26-metre sailing catamaran superyacht WindQuest, reviewed in the September 2014 issue of Boat International magazine.

This new design, however, breaks from tradition with its relentlessly aggressive profile, motor yacht body and a vast area of glazing on the upper deck that JFA is calling a “sky dome”, as seen in the aerial view rendering image below. Yet like all cats, this one is set to offer great stability and fuel economy, both perfect traits for a yacht that JFA says is designed to explore remote destinations.

Deck space looks impressive, and includes a cute seating area on the sun deck and long runs of teak down both hulls ending in dual swim platforms. Forward on the main deck between the two hulls, a nook with sun loungers looks like a particularly nice place to escape to when at anchor. The recess between hulls astern is sufficient to fit a 6.5-metre tender, providing shelter for boarding, while the catamaran platform promises wide open spaces inside.

JFA’s Gael Douget told Boat International that his company could potentially deliver the catamaran in as little as 24 months after signing an order. This isn’t the only exciting design launched by JFA recently. The yard also released renderings of a 50 metre explorer in the summer, designed externally by Bill Dixon and inside by Franck Darnet.