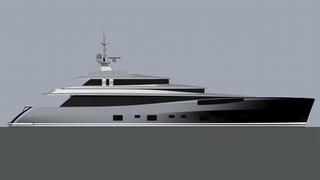 Good news for the superyacht industry as new orders for large yachts kept rolling in through September. Amongst the long list of contracts were two major ones for Jongert, announced during the Monaco Yacht Show, to build motor yachts of 44 and 43 metres in length.

The 44.4 metre motor yacht has been designed by Dubois Naval Architects. A trideck, this yacht looks like a raised pilothouse with an enclosed upper deck, and her harmonious lines forward create a massive bow, resulting in a sleek profile (pictured above).

The number of windows in the hull suggest ample accommodation for 12 guests, divided between a master suite, VIP suite and four double cabins.

Built in steel and aluminium, the Jongert 44MY will reach a top speed of 16.5 knots and a cruising speed of 14 knots thanks to twin 1,450hp diesel engines.

The second order, the Jongert 43MY, is more of a mystery as her owner has eschewed publicity. Designers are unknown for the moment, but this all-aluminum motor yacht will have an LOA of 43.03m. Predicted to reach a cruising speed of 14.5 knots thanks to twin engines, she will accommodate 10 guests in a master suite, two VIPs and two double cabins.

Both projects are scheduled to launch in 2013, and Jongert has already promised more details about them in the near future.

Jongert has also announced the opening of a new branch in Antibes, France, with Niels Lensen running the office. The Dutch yard will be at the forthcoming Fort Lauderdale International Boat Show (stand 664) between Thursday 27 to Monday 31 October.