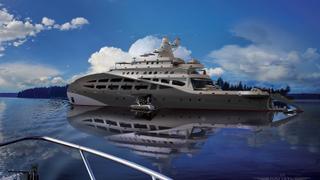 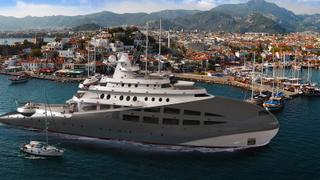 The design, Kosatka, comes from the founder of the Goliath series of polar-class expedition yachts.

It features an aluminium superstructure and steel, ice class hull with the “strength to endure the intensity of driving through moderate multi-year ice conditions”. As a result, Kosatka is “one of the most formidable yachts of her size,” according to Kozloff.

Key features include a 2,415 square foot aircraft hangar, which can accommodate four small or two medium sized helicopters, and a large swimming pool at the bow with a hard-retractable cover.

A stern lounging area sits at the waterline while the six decked yacht also features a crow’s nest equipped with a full command and control helm station. There is also enough storage space for two large free fall lifeboats and a submarine.

Accommodation is for a total of 14 guests. Kosatka has been designed for operation with minimal crew and consequently includes staff accommodation for a team of just four.