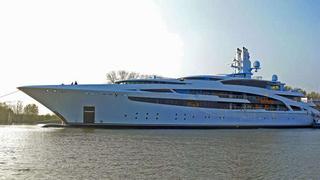 Notably, this will be the second-largest yacht to be launched by Kusch after the 133.2-metre iconic superyacht Al Mirqab, which features diesel-electric propulsion powering her to a top speed of 20 knots, exterior styling by Tim Heywood and interiors by Andrew Winch. For the new project V835, exterior design and naval architecture come from the Monaco-based Vega Yachts and Richard Hein of the A Group. Interiors are by Italy's Studio Massari Architecture & Design.

It was back in December 2012 that project V853's hull splashed at the Kusch yard. Now she emerges fully formed and ready for completion. Kusch project V835 is built in steel and has an ample beam of 16 metres. She will accommodate 22 guests, three supernumerary staff members and a crew of 29. Like Al Mirqab, project V853 will also boast diesel-electric propulsion, projected to deliver a cruising speed of 14 knots and a range of 6,000 nautical miles at a more economical cruising speed.