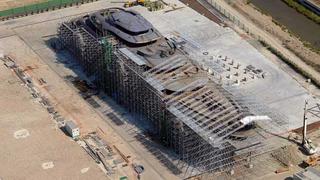 Abdeslam Laraki of Laraki Yacht Design has spoken to us about his design for the 126m Privilege One motor yacht project, few details of which have been previously released.

The yacht, which is number eight in our top 20 new projects, is currently in build at the Privilege yard in Civitavecchia, Italy and delivery is expected in 2013. Construction has also begun on a 137m yacht based on the same design.

‘I was called by Privilege in 2006,’ says Laraki. ‘They had seen some of my work and asked if I was interested in doing large boats over 100m, so we started collaborating. The project actually started as a slightly smaller boat, but as the design developed it grew about 7m.’

Laraki recalls that the yard asked for a something ‘recognisable but classical enough to withstand time’.

‘They already had a GA and some basic hull lines. I had to take both and build around that, creating the lines and aesthetics of the boat, respecting things like deck heights,’ says Laraki.

Among other amenities the yacht features five swimming pools, a beauty parlour, cinema, two helicopter pads and a submarine that emerges from the side of the hull. A full deck is split between the owner’s suite and one of the VIPs. ‘To have a VIP room that extends half the yacht is something unique,’ says Laraki.

Laraki had responsibility for the interior of the wheelhouse and took the opportunity to create an aesthetically ‘pure’ space. ‘It’s something really modern, probably much more than the outside looks of the yacht,’ says Laraki. ‘It’s a little like Star Trek in terms of pureness. We did our best to do everything with a certain flow and complicity that is a bit futuristic.’

An extra deck (making the overall complement eight) was added to the yacht during construction, placing the helicopter deck up-top.

Laraki reports that with the second Privilege hull in build, the yard intends to produce seven more of these yachts in the next 10 years.