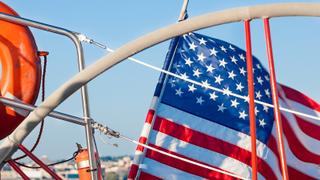 Yacht owners of vessels over 300 GT can now register their boats in the United States thanks to a change in US law. On August 13, President Trump signed an amendment that reversed a 1920 law which defined a yacht as a vessel with a maximum volume of 300 GT. It means owners can now fly an American flag and register yachts that are over 300 GT in the United States.

US Superyacht Association (USSA) chair Kate Pearson said, “This has been a significant issue that the USSA has spent nearly a decade working to correct. We are thrilled to have been an integral part of helping to finally make it a reality and are pleased that yacht owners will no longer be chased from American shores to other countries to flag their vessels.”

Before the amendment, those with yachts over the 300 GT limit could only fly the US flag if they registered their yacht as a commercial vessel. But doing so means that the vessel would be held to different operational and construction standards, as if it were a cargo ship, such as US Coast Guard inspection as "seagoing motor vessels".

Many yacht owners and their advisers didn’t find this to be a reasonable solution. Some owners did pursue acts of Congress to have their personal vessels be exemptions, but this route was gruelling and not the right solution for many. So these yachts had to be registered under foreign flags if they operated outside inland waters.

The legislation, an amendment included on the bill the President signed, received bipartisan support in Congress during its development. Congressman Duncan Hunter representing California’s 50th District said, “I am very pleased that the president has signed legislation that will increase the number of large recreational vessels which fly the US flag. This will lead to more US jobs in the ship repair and supporting industries.”

This legislative action, led by Congressman Rob Bishop of Utah, was made possible from the work of volunteers from USSA, Tilman J. Fertitta, who is building his fifth yacht, and his team “wanted nothing more than to register his yacht in the United States.”

“The economic impact of more large yachts flagging US could be significant, as these large vessels would now provide more high-profile opportunities for American crew, keep yachts travelling in US waters, and spend more time in our repair and refit yards,” said Kitty McGowan, USSA president.

An announcement from the International Yacht Brokers Association notes some caveats to this new law. Starting with that large yachts can’t carry cargo or passengers for hire, meaning no time charters, but it appears to allow bareboat chartering. The vessels must also comply with other requirements for US documentation, including citizenship requirements for the yacht’s owner and crew, and owners must disclose the identity of the yacht’s beneficial owner to the Coast Guard.

A specific US Large Yacht Code is now being developed by the US Coast Guard that will go into effect in 2020. However, in the meantime, a private yacht over 300 GT that is MCA-compliant will now be able to fly the US flag.