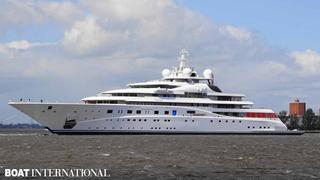 Superyacht Topaz was technically launched today when she emerged from her floating shed at Lürssen's Aumund yard. Very little is known about the motor yacht and even her exact length is a matter of speculation, although she is believed to be the second largest yacht to be launched by the German yard.

While Lürssen are unable to confirm or deny any details about the project due to strict confidentiality agreements, we have it on good authority that she is longer than 144m with a beam of 21.5m.

We will follow up with further details about the yacht once they have been confirmed.

We published the first pictures of Topaz in 2011 when she was transferred from the shed to a floating dock.

Topaz is expected to be completed this year.