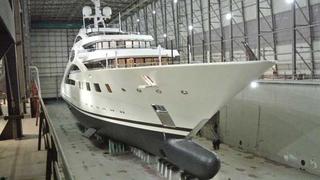 We reported the launch of superyacht Ace on Monday 9 January and Lürssen have now released more pictures of this 85 metre superyacht, which has both exterior and interior design by Andrew Winch Designs. With a beam of 13.8 metres and a 4 metre draught it has a capacious interior, with a classic design and a layout that accommodates 12 guests in six cabins and 30 crew.

Ace has been specified with three generators - one 570kW and two 480kW MTUs and she also has MTU 16B 4000s engines. She is equipped with a Kongsberg Direct Positioning System and Quantum XT Zero Speed stabilisers.

Chris Callahan of Moran Yacht & Ship, which brokered the sale and managed the build of Ace, confirmed that this is the first of six of their projects, ranging from 39 to 87 metres, that will be launched this year.