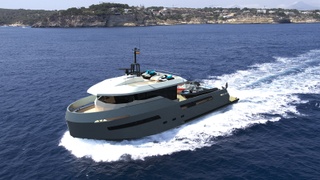 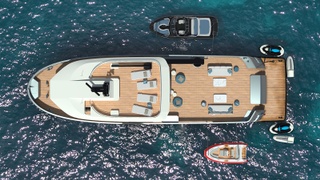 It comes after the yard announced the sale of the yacht last month. Due for delivery in 2022, the yacht's interior has been designed by Franck Darnet Design and will feature guest accommodation for six across a master cabin and two double guest cabins. The crew accommodation of two double cabins meanwhile allows for a staff of four.

The main interior feature is the main deck saloon, which is illuminated by natural light thanks to large windows. The 70 square metre main deck meanwhile becomes a spacious entertainment area once the toys have been launched.

Lynx Yachts said the new series was a response to a “growing market demand” for a yacht combining the capabilities of an explorer and support vessel.

It described the new series as combining the large spaces of its Adventure 29 yacht with the shadow vessel features of the YXT 24 Evolution.

Designed for a “sporty owner”, the Crossover yacht is equipped to carry numerous toys and tenders, with water sports equipment such as SUPs, surfboards, canoes and scuba diving equipment stored in a toy storage area.

Elsewhere, the sundeck will feature a crane, two Yamaha Wave runners and two Jetskis. An Air Nautique 21 tender and five metre RIB meanwhile will be stored on the main deck.

Lynx added that new models will be added to the new Crossover series.