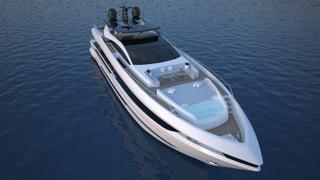 Italian builder Mangusta Yachts has signed the contract of the first hull of its Gransport 33, the “entry level” model of the Gransport line.

The news comes just two months after the yard first officially presented the model at the Miami Yacht Show in February.

Already started on spec, the 33.3 metre yacht has been sold to an American client and will be ready for delivery in 2020.

Mangusta commercial director Francesco Frediani said he was surprised “by how fast we moved from the presentation stage – through renderings and videos – to actually securing the deal.”

The yard previously revealed that the hull has already been laminated and will make its debut at the Cannes Yachting Festival in September 2020.

Featuring exterior and interior design by Alberto Mancini, the Gransport 33 sports “classic design, essential lines and a good balance between interior and exterior spaces,” according to Frediani.

The design incorporates many of the features seen on bigger models of the Gransport line, including a Jacuzzi, infinity pool forward and outdoor lounge. It will also feature a large flybridge and extended cockpit.

The propulsion package of four Volvo Penta D13 and Volvo Penta IPS pods will provide a top speed of 26 knots, with a maximum range of 1000 nautical miles.

"The IPS installation is very compact and gives the possibility to offer more space for owners and guests," Frediani added.

"The system is user friendly and can be used by non-professional drivers. Most of the owners, in this size of yachts, like to drive the boats themselves or like the idea."

Mangusta has also recently revealed it has several other new projects at various stages of development. These include the 50 metre Oceano 50, an explorer and the Gransport 65.