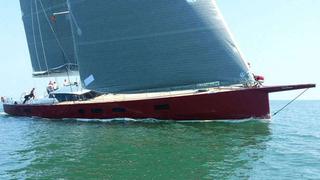 Maxi Dolphin's first FC100 sailing superyacht, the 30.48 Nomade IV, has been splashed and pictures have surfaced of her sailing debut.

Spotted leaving her shed back in May, the yacht designed by French naval architects Finot-Conq can now be seen plying the waters and putting her high-performance prowess to the test. Before her launch, it was reported that Nomade IV would undergo extensive testing and 800 miles of planned sea trials before delivery.

According to Finot-Conq, the brief for the first FC1OO was to created the 'world's fastest 100-foot cruising yacht.' To achieve this, she is constructed entirely in carbon fibre and Nomex in order to stay under strict weight restrictions of only 51 tonnes displacement.

To truly put the fast-cruiser to the test, Nomade IV is planned to take part in the Maxi Yacht Rolex Cup in Porto Cervo, Sardinia. Her red hull will be eye-catching on the race course. Made for cruising as much as racing, Nomade IV's minimalist interior is designed by Pierre Frutschi and accommodates 12 guests. She boasts a transom that converts to a swim step, which also opens to launch a tender and reveals double stairs into the sea. The cockpit table lowers and transforms into a large sunpad.