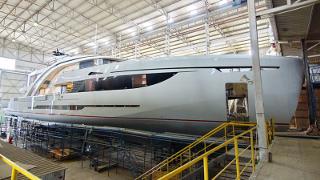 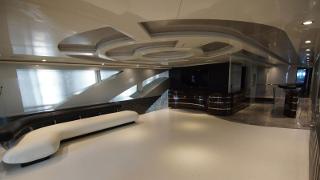 Due to go on show through Fraser Yachts at this year’s Monaco Yacht Show, the 395-tonne Ken Freivokh design features an aluminium superstructure on a steel hull.

This 50 metre project has been in development since 2013 and the launch schedule was announced at last year’s Monaco show. This week (May 16) Mayra Yachts revealed that the hotly anticipated yacht has now left its Antalya facility.

The Turkish builder estimates that Euphoria’s twin 1,600hp CAT C32 engines will return a top speed of 16.5 knots. When cruising at 12 knots, a maximum range of 4,500 nautical miles will be possible.

The four-deck layout includes a full-beam main deck master suite with adjoining office and four guest cabins below deck. Four crew cabins are also fitted on the lower deck, with the captain’s cabin situated on the bridge deck.

Other key features include a gym and spa pool on the sky deck, four zero-speed stabilisers, two floating staircases and an open-plan main deck saloon.

The new arrival is Mayra Yachts’ largest launch by quite some distance. At 49.99 metres, Euphoria is more than twice as long as the yard’s previous flagship, a 19.3 metres trawler yacht designed by Australian naval architect Bruce Roberts.

Founded in 2012, Mayra Yachts is a member of the Prince Group of companies, which also includes the Euphoria chain of spa hotels.