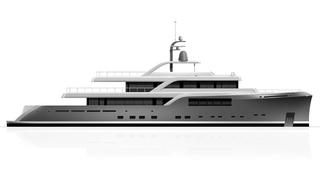 Following the successful launch of the 46m Mazu in November 2010, MCC comes back into the spotlight with a new development, a 46m long range superyacht.

This neo-classic expedition superyacht was developed by the Polish designer Kasia Milewska, who was deeply involved in the Marco Polo series. About this new project, she commented: "I took my inspiration from the ships that were built early in the last century, no nonsense efficiency, the shape of the bow..."

The interior layout offers a great deal of flexibility, with the possibility to transform the saloon on the main deck into a dining area. The master suite and the VIP stateroom, both nearly same size, are on the main deck. Designed for a total of 10 guests, a further three double cabins are located on the lower deck.

Thanks to her retro design, this MCC 46m offers large exterior living areas, with decks clear of toys and tenders which are stored in a large bow garage or in the lazarette.

Lloyd's registered and MCA compliant, she will be built in steel with a GRP superstructure. Two engine options are possible: twin 1,600hp Caterpillar engines, or an eco-friendly single 1,911hp Caterpillar engine used on the Marco Polo series. Performances are good with a top speed of 16.5 knots, a cruising speed 14 knots and a range of 5,600 nautical miles at 10 knots.

Introduced yesterday at the Palm Beach Boat Show, you can discover this MCC 46m on the Cheoy Lee stand (ramp 6, slip 626-628).