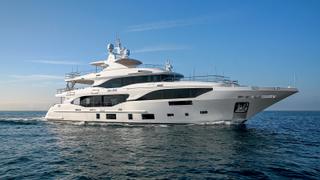 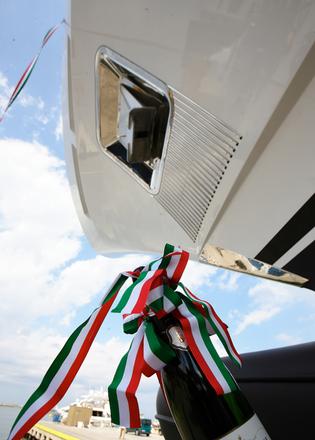 Italian yard Benetti has released full details of Mr Loui, the second hull in the 35.5 metre Mediterraneo 116 series, which was delivered to her Mexican owner last month.

As with hull number one Oli, the exterior design comes courtesy of Italian designer Giorgio Maria Cassetta, while the interior décor was created by the in-house team, working in collaboration with the owner’s architect Ezequiel Farca.

The yard added that natural light played a key role in the development of the interior with a particular focus on liveability and seamless continuity of space. Al fresco dining options include a six-metre wide table on the upper deck, while the 80 square metre superyacht sundeck on Mr Loui has been fitted out with sunloungers, sofas, deckchairs, armchairs and two seperate dining areas.

Moving inside and the spacious lounge area has been split into two discrete areas: one for dining and one for relaxing. Three-metre long windows in each area continue the theme of natural light permeating the interior. Accommodation is for up to 12 guests split between a full-beam owner’s suite situated on the main deck, two VIPs and two convertible cabins with Pullman berths. Meanwhile, the crew quarters allows for a staff of up to seven people, including a captain’s cabin on the upper deck, and the superyacht elevator provides easy access to all three decks.

Power comes from a pair of 1600hp Caterpiller ACER C32 diesel engines that propel Mr Loui to a top speed of 15 knots with comfortable cruising at 14 knots. When trimmed back to her economic speed of ten knots, a maximum range of 3,000 nautical miles is possible, while an electric fin stabilisation system ensures a smooth experience, both underway and at anchor.

Other superyacht projects currently under development at the Italian yard include another Cassetta design, the new Benetti Delfino 95, with first hull due to hit the water before the end of the year.