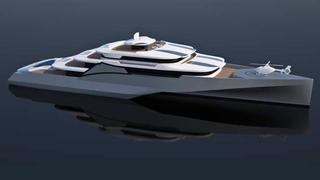 Misha Merzliakov pens a 102m trimaran based on a fast, efficient hull by Austal

Australian designer Misha Merzliakov has penned a 102m trimaran based on a fast, efficient, seasickness-banishing hullform by the shipbuilder Austal.

The design was conceived for an owner seeking a multihull that was economical to build and capable of high speeds. Merzliakov turned to the Western Australian yard Austal, whose platform has been operating successfully in a high-speed ferry since 2009.

‘I have been involved previously in trimaran hullform development from a hydrodynamic and seakeeping perspective – its a fascinating technology,’ says Merzliakov. ‘This yacht means business when at speed.’

The hydrodynamic second-generation hullform combined with a three engine propulsion train mean the yacht is expected to have a 39-knot top speed (as determined in trials of the 2009 ferry). The style of Merzliakov’s superstructure, with an ‘automotive aesthetic’ reflects this performance: ‘I wanted a design that “does what it says”,’ he notes.

The proven hullform also uses less power than other craft operating at similar speeds and maintains pace in waves. Further, its soft roll significantly diminishes seasickness on board. Studies by the yard have suggested that in head seas, incidence of motion sickness will be 56 per cent lower than on a 100m catamaran.