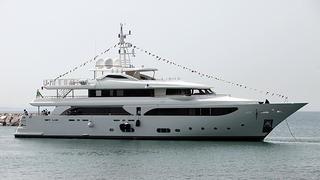 Following the launch of their flagship Chopi Chopi in January, CRN has launched their second superyacht in 2013, a Navetta 43 christened Lady Genyr.

Lady Genyr is the eighth Navetta 43 produced by the Italian yard. This successful 42.6m superyacht series was delivered for the first time in 2007 with Emerald Star, now renamed Emotion, and a ninth hull is already under construction. Like her previous sisters, she's designed by Studio Zuccon International Project with in-house naval architecture.

The classic interior, designed by CRN, accommodates 10 guests in five cabins including a full-beam master with private balcony on the main deck and four doubles on the lower deck. Crew quarters are for nine.

Lady Genyr differs slightly from her sisters with the addition of special features. A lift was added at the request of the owner, linking all decks. The sundeck was redesigned and the central mast was replaced by an arch offering a new layout and more space to this deck, now covered by an hardtop.

Powered by twin Caterpillar C-32C engines, she achieves a top speed of 15.5 knots, a cruising speed of 13 knots and a range of 3,800 nautical miles at 11 knots.

While CRN has recently delivered their 60m J'Ade, Lady Genyr will be handed over in July.