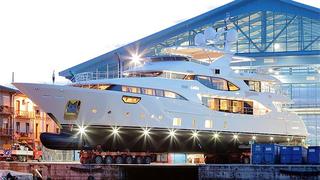 This series of 41.93m composite yachts, which was introduced in December 2010, has exterior styling by Stefano Righini. Notable features include large exterior areas and large windows which provide as much natural daylight as possible inside.

The interior, designed by François Zuretti, accommodates 10 guests, with a master suite on the main deck and two double and two twin cabins on the lower deck, as well as space for seven crew.

Luna will be delivered to her owners for the upcoming season.