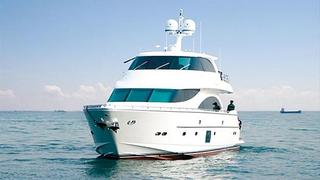 Motor yacht Mechtilda set to be delivered by Horizon

While Horizon announces no fewer than six deliveries over 24 metres between now and April, the Taiwanese yard also sends news of their latest motor yacht called Mechtilda.

Recently launched, Mechtilda has already completed her sea trials. She is another hull of the successful E88 series designed by John Lindblom. Built in composite, she has a length of 27.24m.

Mechtilda is a E88 in the enclosed sundeck version, giving a generous interior volume. Her layout was entirely customized to follow the owner wishes. The galley was moved aft on the main deck, to be in connection with the aft deck. It is followed by a dining area, a saloon and the owner office forward, enjoying a panoramic view. Accommodation on the lower deck is for eight guests in a full-beam master suite, a VIP and a double and a twin cabin.

Mechtilda will be delivered in Perth, Australia in mid-March.