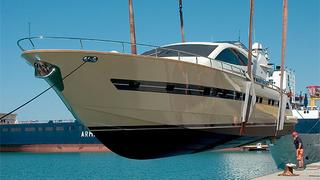 The 12th hull of the Cerri 86 series, Pachamama is the first yacht launched by the Italian yard since it was purchased by Gruppo Gavio last year and became part of the new Cerri - Gruppo Baglietto.

Designed by Carlo Cerri and the in-house team, the Cerri 86 motor yacht offers performance and comfort. One characteristic of this range of yachts is a split-level saloon, with a large dining area enjoying panoramic views. The standard version accommodates eight guests in a master, a double and two twin cabins.

The Cerri 86 is powered by twin 1,945hp MTU engines giving a top speed of 40 knots, a cruising speed of 35 knots and a range of 420 nautical miles at a more economical speed.

Pachamama will make her debut at the Festival de la Plaisance in Cannes this September, displayed by Rodriguez Group.

Cerri has also announced that another Cerri 86 motor yacht is under construction along with its second Cerri 102.