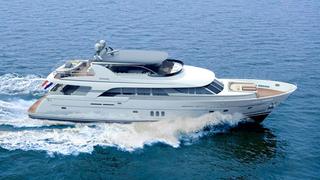 Commissioned by a Russian client earlier this year, the 30m Mulder 98 Flybridge motor yacht is now under construction at the new Mulder Shipyard facility.

Designed by Guido de Groot with naval architecture by Ginton Naval Architects, she is being built to Lloyds classification and will be powered by twin 1600hp Caterpillar C32 engines delivering a maximum speed of 22 knots and a range of 4,000 nautical miles at 10 knots. Delivery is scheduled for the second quarter of 2013.