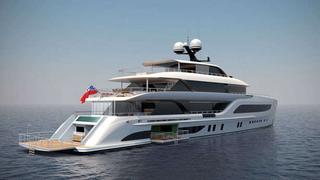 Great news arrives from Sergei Dobroserdov at Nakhimov Yachts that he’s signed a contract for the construction of a new 55m hybrid-powered motor yacht at Admiral.

The yacht will be build at Admiral yard in Italy in aluminium and will have a revolutionary hybrid power system enabling the yacht to cruise at 10 knots on electric engines consuming just 95 liters of fuel per hour.

Using combined power, the yacht will be capable of reaching a maximum speed of 16.5 knots. In line with the owner's request for a very efficient and silent vessel the yacht will also be equipped with modern variable speed Nothern Lights generators and a 'silent' Voith bow thruster.

The concept and exterior design is by Dobroserdov Design while naval architecture is by Vripack and the yard. She will have two master staterooms on the bridge and main deck as well as two suites on the lower deck that can be converted into four guest cabins.

Delivery is expected in spring 2016.