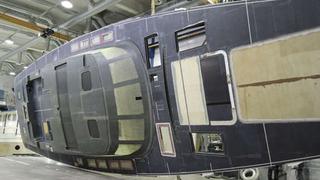 Finnish sailing superyacht builder Nautor’s Swan has released an update on the build of its 105 RS, the first hull in a new Nautor's cruising-sailing yacht range.

The design of the first hull began as a semi-custom performance cruiser, with all the main characteristics of the standard Swan 105. The owner then asked German firm Beiderbeck Design to work on an innovative interior and layout. The result – due to be launched and delivered before summer – looks set to be a yacht that combines aspects of pure Swan as penned by naval architect German Frers, with an overall concept and interior by Beiderbeck Design.

The hull, made of epoxy prepreg-SPRINT sandwich, was released after curing in January 2013. The interior was crafted at Nautor's woodshop in Kronob, with many customised details, while infrastructure such as engine room, hydraulics and bilges were completed over the summer of 2013.

‘This Swan 105 is intended to be very comfortable and we called an external consultant to work together with our own designers from the very beginning, with the aim of building a very quiet yacht with minimal noise disturbance,’ says Kristian Kjellmann, project manager on the Swan 105 RS. ‘We used data from past projects and combined this with the most innovative materials and today’s expertise to reduce the noise level, especially in the owner’s and guest areas.’

Nautor is finishing the installation of furniture in the saloon, as well as the deckhouse windows, the bimini and the cockpit furniture. Dry testing is due to begin, before the first Swan 105 RS is launched and delivered in time for sailing this summer.