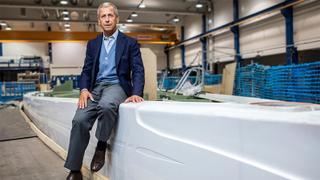 Finnish sailing specialist Nautor’s Swan has given an update about the expansion of its boat building facility.

The yard’s Boatbuilding Technology Centre (BTC) is currently undergoing a refurbishment and expansion, which began in 2017, and will cost around €7.5 million. The work includes the building of new production facilities, which will expand the company’s total production facilities to cover 6,040 square metres.

The plans, which were presented by Nautor’s Swan chief executive Giovanni Pomati at the Monaco Yacht Show, will include the rebuilding of the yard’s Hall A3 to include a specific joinery area.

Hall C, meanwhile, is being converted to facilitate the lamination of GRP parts and the production of bulkheads. Hall D will be dedicated to high-tech lamination and will be fitted with an oven and halls for painting, grinding and polishing.

The original joinery facility located in Kronoby has been closed since the end of last year and Pomati pledged that all operations from the original base will be transferred by the end of the year.

Pomati also revealed that the yard currently has five new models in production, describing it as “one of the most active yards” for yachts measuring between 16 and 40 metres.