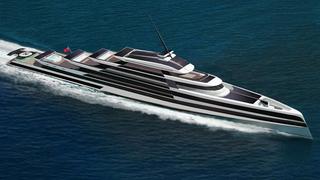 Richard Sauter at Sauter Carbon Offset Design announces a new eco-friendly superyacht design – the Ark Angel. Faster and far greener than any yacht in her class, she’s a carbon neutral Emax superyacht that maximizes ecology, energy, efficiency and economy to achieve a 50 to 100% reduction in fuel consumption and GHG emissions.

Ark Angel features the only compound engines other than the Curtiss Wright Cyclone to ever go into production, the Daimler Bluetec Turbo Compound DD 16. Employing the Daimler EPA “on road” turbo compound engines, the solar hybrid Ark Angel LSV delivers the cleanest marine propulsion system in the world. At 28 knots fuel consumption and CO2 emissions are reduced by 50%, at 18 knots by up to 75% and at 14 knots by up to 85%.

Richard Sauter head of design comments “I consider Ark Angel the champion of green power, not because she can do 28 knots and cruise for up to 5,000 nautical miles carbon neutral, but because in leading the campaign for responsible yachting, she is challenging all comers.”

Zero Carbon cruising range at an average of 10knts unlimited