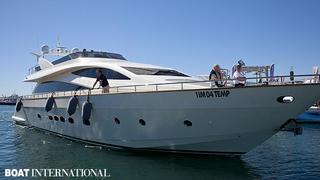 In mid-July, we reported on the marketing campaign of Permare to promote the construction of their latest Amer 92 motor yacht on Twitter. Splashed early September in Viareggio, the yacht was presented for the first time at the Festival de la Plaisance of Cannes last week, where she was efficiently sold.

Barbara Amerio, co-owner of Permare, confirmed the sale of this new Amer 92 during our visit at the boat show last week. The 9th hull of this series was sold during the show to an European owner.

As a reminder, the Amer 92 is a 28 metre composite motor yacht designed by Massimo Verme and the yard’s in-house team. She accommodates eight guests in four cabins: a full-beam master, a full-beam VIP and two twins, plus a crew of three. Powered by twin 1,800hp MAN engines, she exceeded 32 knots during her first sea trials, and her cruising speed is estimated at 27 knots.

The yacht will be on display at the coming Genoa Boat Show. Then she will be delivered after slight modifications requested by the new owner.