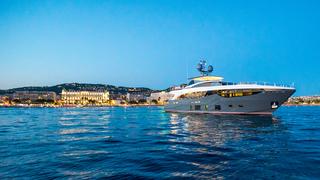 The first Princess 35M superyacht, Antheya III, has been delivered to her Middle Eastern owner who is letting the British yacht builder show off its creation at the Cannes boat show.

Her owner is a previous Princess customer moving up in size with his new yacht. The owner's earlier boats were also named Antheya, a combination of his children's names.

Per the owner's brief, the flybridge of _Antheya III _includes al fresco dining for 12 around a circular table under the shaded hard top. Her large and well-planned sun deck features a sun pad aft, a u-shaped lounge seating area and a central bar area.

The large and versatile foredeck lounging area is bigger than on previous M Class yachts. Antheya III's foredeck provides a space for outdoor entertaining, as does the expansive aft deck, which offers an additional al fresco dining option. At the aft of the 35M, a platform lowers to deploy a tender up to 5.65 metres in length from the garage.

For the Cannes boat show, Antheya III has been decked out in Fendi Casa decor to showcase another brand under the LVMH umbrella.

Notably, there are three more 35Ms in build already. Hull 2 and 3 are well underway, with hull No 4 in moulding stage. The second hull will launch beginning of next year, and the third and fourth at end of the year. Hull No 5 is available to be built spring of 2017.