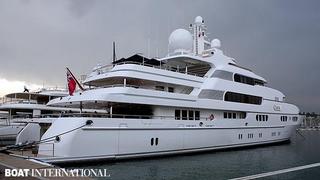 Yesterday evening saw the first presentation of the superyacht Titania following her six-month refit at Lürssen's Rendsburg yard. The event took place at the IYCA in Antibes, hosted by Hill Robinson.

When she was launched by Lürssen in 2006, under the name Apoise, Titania had a length of 67m. Sold by auction in March 2010, the yacht continued to cruise the world (she's one of the few yachts to have transited the Northwest Passage), before her new owner decided to upgrade her.

Major modifications were made. Her Espen Øino exterior design was slightly changed to accommodate a 3.8m stern extension, which now features a beach club with sofa, bar and sauna. The yacht's new length of 70.8m is expected to exceed 72m when a figurehead is added to the bow.

Inside, the original classic design by François Zuretti has been slightly updated, but the general layout has been changed. On the top deck, a veranda has been added to accommodate a brand new gymnasium. Its height above the other yachts affords fantastic views from this crow's nest.

The layout of the upper deck has been completely transformed with the former observation lounge replaced by a new VIP cabin, also with fantastic views, that could easily become a second master suite. On the same deck is a large massage room and a pool on the aft deck.

Another interesting modification is on the lower deck, in the middle of the guest accommodation, where two special double crew cabins have been added: one of them created out of a laundry deemed unnecessary because a larger one exists on another deck, and the other formerly a staff cabin.

Titania can now accommodate 14 guests in a large master suite on the main deck (with its own massage room and office), the special VIP on the upper deck, another smaller VIP on the bridge deck, and four double cabins on the lower deck (two of them with a Pullman).

The yacht is powered by twin 1,380kW Caterpillar engines giving a top speed of 16 knots and a cruising speed of 14 knots. Equipped with zero speed stabilisers and a complete fleet of tenders and toys, she will be making a grand entrance on the charter market in the coming season.

Titania will spend her summer season in the Med with weekly rates starting from €600,000 in high season and €550,000 in low season, and come the winter she will be heading to the Indian Ocean...