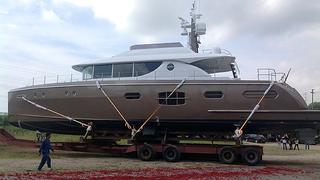 Second hull of the NISI 2400 series designed by Ward Setzer, the GT version was customised according to the wishes of her North American owners. She is slightly longer than her sister, with a length of 24.38 metres, and more than other 300 changes to the design were also made – including an expanded sundeck, a spa pool fitted on the aft deck, propulsion limited to twin pods giving a top speed of 30 knots, a storage solution for the 4.5m tender on the bathing platform and modification of the interior layout.

Like her sister, the NISI 2400GT is RINA classed and MCA compliant.

Following her sea trials, the NISI 2400GT will be shipped to Florida where she will make her debut at the Fort Lauderdale Boat Show in October.