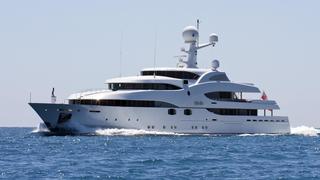 Video: Nourah of Riyad Refloated After Capsizing in Greece

The 70-metre motor yacht Nourah of Riyad has been refloated after capsizing in Greece earlier this month.

A time-lapse video online shows the efforts to stabilise the yacht, which is understood to have capsized on March 8 while being hauled out for maintenance at a Greek yard.

The yacht has now been moved to another dock where the incident will be investigated and repair work will get underway.

Delivered in 2008 by Turkish yard Yachtley, Nourah of Riyad was designed inside and out by Donald Starkey and offers accommodation for 22 people with 18 crew.