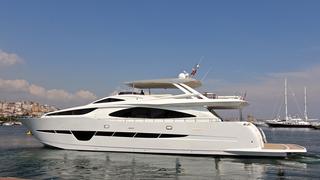 Numarine's 102 raised pilothouse superyacht My Way – now delivered to her owner – has been given a facelift thanks to a restyle of her exterior. This modification has introduced larger, curved windows to her exterior profile and added new glazing to allow more light inside.

The Turkish yard announced it received an order for a new 31.08m 102 superyacht in March 2014. The exterior design comes from Italy’s Design Studio Spadolini, naval architecture is by Umberto Tagliavini, and interiors are by long-time Numarine collaborator Can Yalman.

An evolution of the 102 RPH – the first of which was first launched by Numarine in 2007, named Sesame – the refreshed version incorporates many client requests and functional updates as well.

“The face-lifted yacht My Way has not only improved aesthetically, with its new window treatment, the fantastic panoramic hardtop, and almost 60 square meters of flybridge, but also beneath the surface,” says Antonio Caviglia of Numarine. “Thanks to a repositioning of the crew quarters and the engine room, we have improved the yacht’s performance, increased the size of the crew area, and with the additional implementation of state of the art soundproofing techniques and materials, we have achieved incredibly low levels of noise, vibration and harshness”

The crew accommodations were moved to be placed more centrally while the engine room is moved further back, giving the crew more space while the yacht enjoys a quieter ride with the engines further back.

My Way is designed to be “agile and fast” – powered by twin 1,825hp Caterpillar C32 engines, she is expected to reach a top speed of 28 knots and cruise at 22 knots.

The raised pilothouse that gives My Way its name is found between the main and upper deck; the full-beam space features a captain’s chair, helm station, chart table and seating area where guests can enjoy the view from the pilothouse.