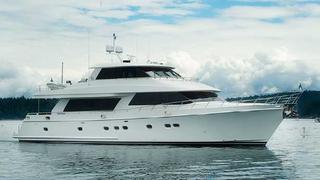 Good news from Ocean Alexander Marine Yacht Sales as it announces the sale of its 2010 Ocean Alexander 88 motor yacht, 88003, with Kevin Piper the selling broker and Niel Steenkamp the listing agent.

Taken in trade, the yacht was listed for only two weeks before being sold to its new owner from California, who has owned two other Ocean Alexander motor yachts.

The 26.8m motor yacht shares much in common with its slightly bigger sister, the Ocean Alexander 90, sleeping six guests in a master and two double cabins, and featuring both formal and informal dining areas, a main saloon, a fully enclosed skylounge on the upper deck, and a professional galley which is open to a guest diner area, country-kitchen style. Crew quarters comprise two cabins in the aft lower deck. The yacht is equipped with a pair of C-32 Caterpillar engines.