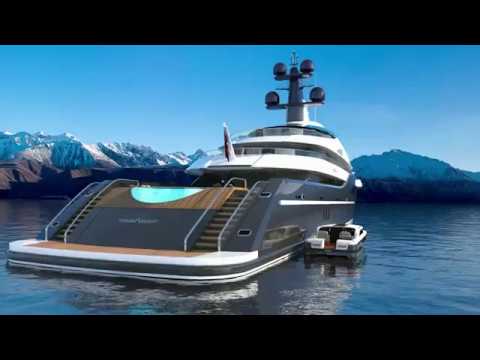 Dutch yard Oceanco has teamed up with designer Luiz De Basto for its latest concept, the 90 metre Cosmos.

Inspired by a desire to connect with the yacht’s surroundings, whilst remaining in a controlled environment, this futuristic design features an enormous glass dome that covers the skylounge and can be dimmed or tinted to suit the mood on board.

De Basto explained that extensive studies have gone into the design of Cosmos to ensure it can be commissioned. “The glass dome, while it looks simple, is extremely complex,” he added. “This provides an interesting tension between being adventurous and being safe.”

Forward of this area is an open observation deck, accessed via sliding glass doors, which would be fitted with a superyacht spa pool, creating an ideal spot for watching the world go by.

Other key features on board Cosmos include a superyacht helipad on the foredeck and an aft-deck infinity pool. Al fresco dining options are plentiful with seating for ten in the cockpit and on the upper deck aft.

Further details are yet to be revealed, with the total accommodation capacity and engine installation unclear. However, Cosmos would certainly cut a striking figure on the water, with progressive lines creating a sporty profile. What’s more, her hull was developed in collaboration with British naval architecture firm BMT Nigel Gee.

Other superyacht projects currently under development at the Dutch yard include the 105 metre sailing yacht Black Pearl and the 110 metre flagship yacht Jubilee, both of which are due to be delivered later this year.