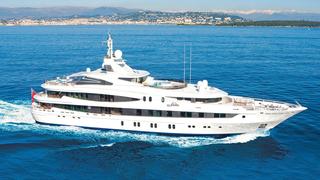 The 66 metre superyacht Natita has been seized by US officials after her owner failed to service his loans to US bank Goldman Sachs.

The Wall Street Journal reports that a $32million loan was taken out in 2014 with Natita and the owner’s other yacht, the 57 metre Bad Girl, used as collateral. US Federal Marshals seized the larger yacht earlier this month and she is being impounded at her berth in West Palm Beach, Florida.

Natita is currently listed for sale with Burgess and Worth Avenue Yachts, asking $39.9million after a major price drop back in March. When contacted by Boat International, the brokers confirmed the news, but added that the steel-hulled motor yacht is still seriously for sale.

Built to Lloyd’s Registry standards as Oceanco Y661 and launched in 2005 bearing the name Dilbar, Natita features accommodation for 12 guests in six staterooms and room for 22 crewmembers. Refitted in 2012, her interior décor is by the late Alberto Pinto and she boasts an on-board cinema, helipad and a large internal volume of 1,801GT.

The fate of Natita remains uncertain, with Fortune claiming that she will be auctioned off to repay the bank’s loan.