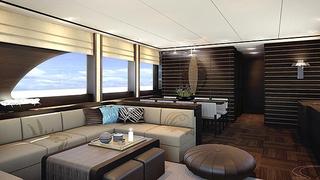 Mulder Shipyard has provided more details about its Mulder 98 Flybridge currently under construction at its new facility, with the Dutch yard revealing the interior designs developed in collaboration with Omega Architects.

This 30m motor yacht was commissioned by a Russian client early 2011. Designed by Guido de Groot with naval architecture by Ginton Naval Architects, she is being built to Lloyd's classification and will be powered by twin 1,600hp Caterpillar C-32 engines giving a top speed of 22 knots and a range of 4,000 nautical miles at 10 knots.

Omega Architects has been chosen for the interior design, and the first renderings show a modern interior featuring stained and natural American walnut, creating a contrast of colours and materials. It will accommodate eight guests in four cabins including a full-beam master, a VIP and two double cabins.

The Mulder 98 Flybridge will be delivered mid 2013.