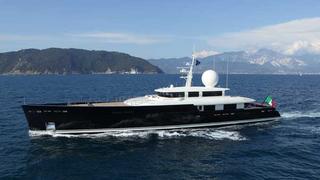 On board superyacht Galileo G: the second Vitruvius launched by Picchiotti

A giant comms dome sat atop the sleek hull and superstructure of the new 55 metre Vitruvius meant that Galileo G was a hard yacht to miss as she waited patiently off La Spezia’s Porto Mirabello to take us for a ride. The second Vitruvius yacht to emerge from the Picchiotti yard, part of the Perini Navi Group, is a special yacht in several areas – not least for her hull which has been designed to ice class in preparation for a transit of the Northwest Passage.

She follows the much-praised 50 metre Vitruvius yacht Exuma, which was launched by the yard this time last year and has subsequently taken her owner – and charter guests – on several voyages of discovery, and is currently in the Pacific. Galileo G may be heading to colder climes, but the ethos behind her design remains the same – a hull form from renowned sailing yacht designer Philippe Briand that borrows from sailing yacht hull design and focuses on seaworthiness and efficiency. Indeed, there is a certain irony to the Vitruvius series, as when Perini started building sailing yachts in 1981, Fabio Perini looked to incorporate ideas from motor yachts...

‘The concept,’ explains Briand, ‘is to be an efficient motor yacht. You achieve this through having the right proportions and from the design of the hull lines, using previous experience of designing sailing yachts to get those lines. Both Galileo G and Exuma before her were also built to the specific requirements of their owners. For Galileo G, the basic requirement was the same as Exuma in the sense of going further in remote areas, but the owner had other requirements – he was not limited by wanting to keep the yacht under 500GT. After some discussion we decided to go quite high above that, and ended up with a 725GT, 55 metre yacht. The 10 per cent increase in length has therefore delivered a 50 per cent increase in volume.’

The result, then, is a fine looking yacht from the outside with a comfortable interior. The theme throughout is predominantly mahogany with wengé inserts, with the exceptional crew area forward featuring white panelling. Indeed, a lot of thought has obviously been put into the crew aspect, seeing as it is likely that they will be operating the yacht in remote areas for long periods of time.

But the real surprise comes on the water. As we steamed out past the breakwaters in the bay of La Spezia, the immediate impression was how stable and steady she runs. A hard turn at full speed a little over 16 knots introduced barely a hint of heel, and her fore-and-aft pitch was non-existent in the slight sea state – all particularly impressive seeing as her stabilisers remained switched off for the duration of our sea trial. Even more impressive were the noise levels in the interior; at 10 knots we registered just 46dB in the saloon/office area of the owner’s suite.

Galileo G, then, is a highly impressive boat, and a fitting follow-up to Exuma. Look out for a full review in a forthcoming issue of Boat International.