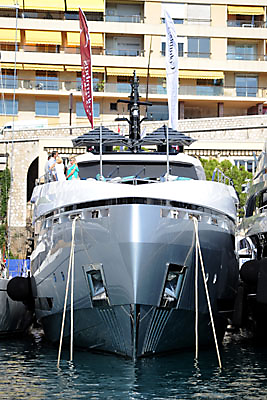 On board the Columbus Sport Hybrid superyacht in Monaco

Boat International visited the 40m Columbus Sport Hybrid superyacht as she made her debut at the Monaco Yacht Show.

The aluminium semi-displacement motor yacht was ordered by a Russian client in 2011 and launched in early September at the Palumbo yard in Naples. She features naval architecture, exterior styling and lines by Sergio Cutolo of Hydro Tec, while the interior design is by the shipyard team in collaboration with Italian studio Hot Lab and the owner.

The Sport Hybrid was designed to be a family boat with a sporty edge and arguably the most distinctive – and complex – aspect of the yacht is its propulsion system, the benefits of which Cutolo describes succinctly.

‘We have two diesel engines and we also have two electric engines,’ he says. ‘We have three modes of operation: diesel mode is absolutely conventional, you can go with at 22 knots maximum speed, or a consumption of 150 litres at 14 knots. The second mode is diesel-electric – you switch off the main engines, put the three generators in parallel (the diesel engines are also generators) and feed the two electric motors that drive the boat at eight knots. With 40dB in the cabins, you can make navigation during the night.’

‘The third mode we call shaft generator – we drive the main engines, these drive the electric motors (which are also generators) so you switch off the diesel generators and you make the power for the boat through the main engines. So you save fuel. It’s a very flexible system,’ says Cutolo.

For the living spaces the owner requested ‘no distraction’ from the sea views, as Cutolo puts it, and high head heights. In the main saloon, this has been translated into an airy space with knee-to-ceiling windows and wide fold-out balconies port and starboard that really open up the space. Even the bulwarks have glass panels so that sitting at the forward dining table you see straight through the structure to the sea. The division between the saloon and dining area has been left intentionally indistinct, emphasising the relaxed, open atmosphere.

Forward on the main deck the owner’s suite features an office, large dressing room, and forward an en suite with a huge double-head shower. There are two guest cabins and an aft VIP cabin on the lower deck – this can be transformed into two cabins by pulling a sliding screen through the middle of the cabin and pulling a bed down from the wall of the cabin’s sitting room. Throughout the yacht the colour palette is neutral, with browns, creams and whites.