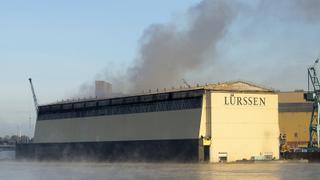 More than 150 firefighters called to major blaze at Lürssen shipyard

Over 150 firefighters were called to German shipyard Lürssen last night (September 14) after a major fire broke out, damaging a new build yacht.

The fire broke out at around 2am at the floating dock of the Bremen-Aumund facility.

The yard said the emergency procedures began “immediately” and all employees working onboard were safely evacuated and examined. Following their evacuation, the rest of the premises was cleared.

It is not known what caused the fire or the extent of its damage. In a statement Lürssen said no casualties had been reported and firefighters and rescuers remain onsite.

It is not yet clear which new build yacht was damaged in the fire but according to reports it measures over 100 metres. No other ships or facilities have been affected.

A statement released by the yard read: “In the early morning at approximately 02:00 a fire broke out in the floating dock of the Fr. Lürssen Shipyard in Bremen-Aumund and onboard the yacht within it. The emergency procedures commenced immediately, in the course of which the persons still working on board were evacuated and examined with respect to possible smoke intoxication and the firefighting department and emergency response teams were alarmed.

"Additionally the whole premises were evacuated and no casualties are known. Currently, about 180 fire fighters of the Bremen fire departments and of the surrounding counties as well as the fire department of the Jos. L. Meyer Shipyard are on duty, but are being gradually released. No statement can be made at this stage as to the cause of the fire or the extent of the damage.

"We would like to express our sincere gratitude for the tireless efforts and professional response of all those involved, including the fire service, police, the technical support unit, and our own employees."