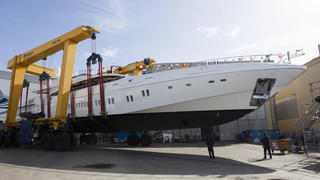 Built in Italy under the codename Project Starburst, this is the tenth hull in the series. Key features on-board the custom-built interior include five cabins to accommodate up to ten guests, with the master suite spanning the full 9.2 metre beam of the lower deck. Five crew cabins provide additional accommodation aft.

The in-house design team worked closely with the new owner, who knew exactly what they wanted as this is their second Overmarine yacht.

Exterior styling by Overmarine and Stefano Righini includes new single-pane glazing for the main deck saloon, as well as an elongated flybridge with an aesthetic grill to add to the yacht's dynamic looks.

In true Mangusta style there will be plenty of power on tap, with four 2,600hp MTU engines, which, combined with four Rolls Royce/Kamewa NP waterjets, will propel the 310-tonne GRP hull to a top speed of around 35 knots.

Stabilisation comes from four Seakeeper units, which can be used at anchor or in displacement mode for idle speeds of up to ten knots.

The Mangusta 165 E is proving to be a hugely successful design for Overmarine, with hulls 11 and 12 already sold to European clients.

Francesco Frediani, group commercial director at Overmarine, said: “Over the past few years we have established ourselves as a leader in our sector. The Mangusta 165 E has undoubtedly contributed to this.”

Incognito was sold by brokerage firm Moran Yacht & Ship, whose construction team managed the build, and is the third model in the Mangusta 165 E series to be delivered to the USA.