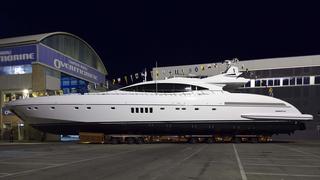 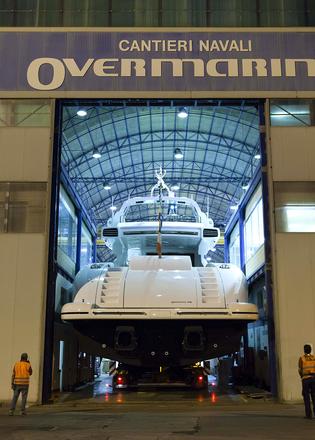 Italian yacht builder the Overmarine Group has launches its first Mangusta 132 high-performance yacht. Overmarine revealed the new Mangusta 132 superyacht design in August 2013 and just sold the yacht in January of this year.

The Mangusta 132 is an evolution of the successful Mangusta 130. Overmarine has been busy introducing new models – the Mangusta 132 follows on the heels of the Mangusta 94, 110 and 165 E and is the is the fourth new Maxi Open Mangusta yacht model that the company has released to the market in the past two years.

Designed by Stefano Righini in collaboration with the in-house team, the 132 has distinctive racy and sporty exterior lines, and she carries forward recent technical and styling updates found in the new breed of Mangustas. These innovations include a large, single window on the main deck to deliver exceptional views and natural light in the main saloon; a newly styled flybridge with more aggressive grating; and a spacious sun deck, which can be used as a private owner's area or fitted as a second helm station.

This is all stacked on top of a new hull design, which benefits from hydrodynamic technical developments found on the Mangusta 165. The 132 also utilises new MTU engines with a water jet propulsion system, delivering a top speed of 36-plus knots, and the Mangusta 132 has Zero Speed gyroscopic stabilisers for added comfort. Notably for a high-performance yacht, attention has been paid to economical cruising options. The Mangusta 132 is also designed to run comfortably at lower speeds for reduced fuel consumption.

As this is the owner's second Mangusta yacht, he knew exactly what he wanted for his new Mangusta 132. On board volumes were of importance, as was high performance and comfort at these fast speeds. The general arrangement of the interior was carefully planned, with a focus on the separation of guest and crew areas. The Overmarine Group's Design Department provides layout and decor options, and this owner chose a four-owner layout with a second lower saloon rather than the standard five-cabin layout.