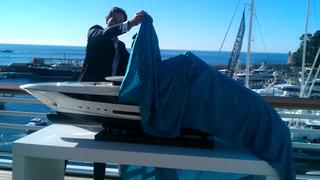 During the Monaco Yacht Show, Overmarine unveiled two new yacht models it will build, the Mangusta Oceano 55 and Mangusta Grand Sports 48, both designed by Alberto Mancini and AM Design.

The a steel and aluminium Mangusta Oceano 55 superyacht is the first of a new line, and the Mangusta Grand Sports 48 will be constructed in aluminium.

Alberto Mancini described his concept for the Mangusta Oceano 55 as "stylistic dynamism." The design is characterised by allowing natural light to flow in, a seamless connection between the interior and exterior and strong exterior lines.

The yacht features superb living spaces, including a 160 square metre flybridge. The pool on the foredeck has a skylight that allows light to shine into the master suite, which sprawls over 100 square feet.

The second yacht Overmarine introduced at the Monaco Yacht Show is the Mangusta Grand Sports 48 – a brand new concept for the builder, which boasts a fast displacement hull. Top speed is expected to be around 26 knots and long range is 3,800 nautical miles.

Mancini said that when he started sketching the yacht he had three mandates in mind: it had to be beautiful, sporty and elegant; exulting the Mediterranean; and exporting its idea worldwide.

The Mangusta Grand Sports 48 also has great windows and an infinity pool with a skylight projecting light into the master suite. It will have conventional power, twin MTU 2000 propulsion and will be built in aluminium in Pisa. Mancini created a complete interior proposal projecting calm and integrating light into the design.