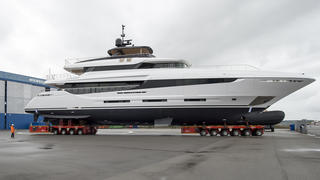 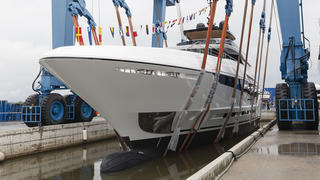 Italian yard Overmarine has announced that the first hull in its Mangusta Oceano 42 series has been launched.

The new arrival is an historic model, as Overmarine’s first tri-deck yacht, first steel hull and the first launch at its new facility in Pisa.

The company hosted a launch ceremony on June 4 that was attended by the owner and the mayor of Pisa.

Group CEO Maurizio Balducci said: “We are both happy and proud to be able to say that this is the day on which we launched a beautiful ship, with unique features for a unit of this size.”

Overmarine debuted the new Mangusta Oceano 42 displacement superyacht concept at the Monaco Yacht Show in 2013 as a new direction for the brand, which is traditionally known for high-performance, open sports yachts.

“What we realised,” said Overmarine commercial director Francesco Frediani, “is that while Mangusta is the perfect boat for the Med, Florida, The Bahamas and so many parts of the world where speed helps in reaching your final destination very quickly, in some other parts of world, we do not find same situation. In other countries, the final destination can be very far off, and you need long range to achieve this.”

Upon the sale of the steel and aluminium superyacht Oceano 42, he said, “This sale marks an important step for our shipyard and for our ocean-going vessels line. This is a segment in which we believe we can play a key role and become a leader, as indeed we believe we already are in the Maxi Open segment."

Alberto Mancini designed the boat inside and out and has incorporated a number of eye-catching features. One is a sunbathing area with a swimming pool boasting an infinity-style waterfall overlooking the bow. A glazed skylight at the bottom of the swimming pool allows light and translucence to flood into the owner’s bathroom on the deck below.

Towards the stern, the tailgate has glazed cross-cuts, which give glimpses of a fully furnished “beach area”. Once open, this stretches out over the sea, creating a platform with the glazed surfaces becoming a source of natural light. At night, underwater lights filter through to create added atmosphere.

The interior is designed to accommodate up to 12 guests and seven crew, with maximum privacy and freedom of movement among the key aims of the design team. “Everything is linked to the external area,” said the yard. “There are huge windows in the saloon, through which natural light comes and in the other areas transparent glazing brings light to the various environments, increasing the perception of space.”

The launch comes just eight days after Overmarine announced that it has already sold hull number two in the Mangusta Oceano 42 series.