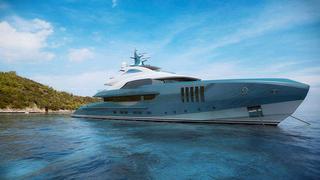 The company, founded in 2010, plans for the three-deck motor yacht to come in under 500GT, while still maintaining all the volume and fully custom luxury expected of a superyacht of this size. The name of the concept is called Squalo Bianco. This Italian name translates to great white shark in English, and makes total sense after only a moment staring at the aggressive, shark-like lines and gill windows of this 49m motor yacht.

The hull has been designed to offer the best of both displacement and planing cruising, with 27 knots on tap and a transatlantic range at cruising speeds. Inside, the owner gets a private, full-beam stateroom with full-height windows while guests can choose between four other suites which all have direct access to the main deck.

The deck spaces feature an infinity pool aft and a spa tub for six on the sundeck. The tender garage, meanwhile, has been designed to allow side launching of the tender, so as not to disturb guests lounging on the large bathing platform.