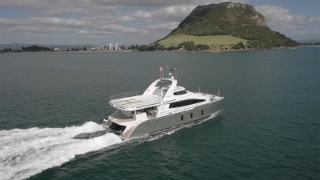 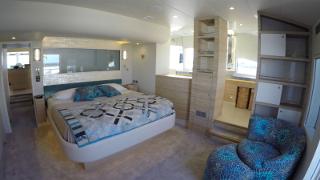 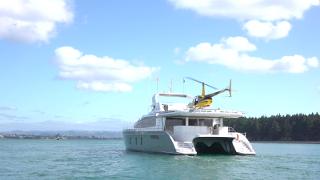 The new multihull superyacht has recently been sea-trialled off New Zealand, prior to delivery to her new owner.

Interior styling is by Sylvia Bolton, whose previous credits include 32 metre yachts for Northstar Yachts, Christensen and Cheoy Lee.

The decor features light surfaces and pastel shades, taking advantage of the kind of expansive open spaces that you would expect from a 24 metre catamaran.

Samara’s layout includes a main-deck owner’s suite sprawled across the 9.5-metre beam, as well as three guest cabins and a single crew cabin below decks.

The exterior by Scott Jutson Yacht Design is dominated by an upper deck helipad, which can be used to carry a Robinson R44, one of the most popular helicopters for superyachts.

Samara has a very flexible superyacht helictoper deck — for ease of landing, the radar arch slides forward, the landing pad slides out and the guard rails fold down.

Other superyacht toys stored board Samara include a pair of Hobie Triak sailing catamarans and two Honda 230 motorbikes for exploring on dry land. Key features include a hydraulic bathing platform for launching and recovering water toys between the two hulls.

Power comes from a pair of 800hp MAN R6 engines, which can deliver a maximum cruising range in excess of 2,500 nautical miles from the 14,000 litre fuel tank.

Founded in 1987, Pachoud Yachts moved into a purpose-built facility at Tauranga in 2000. Notable previous yachts include the 26.46 metre powercat Pacific Harmony, which was launched in 2003.