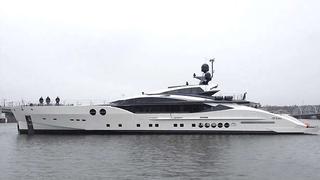 Palmer Johnson has announced the launch of hull number two in their PJ170 series. She has been entirely designed - concept, layout, exterior design and interior design - by Nuvolari Lenard Design for Palmer Johnson.

Known as project Apollo, this 52.4m yacht is built in aluminium to Lloyds class, and is MCA compliant. This superyacht offers expansive accommodation for up to 12 guests in five staterooms plus eight crew in five cabins. Features include a foredeck swimming pool and gyro stabilisers for hull efficiency, while twin 2565hp MTU engines will give her a cruising range of over 2,500 miles at 12 knots. The build was project managed by Moran Yacht & Ship who also sold the yacht originally.