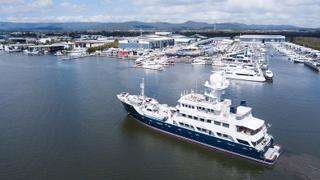 Upgrades included major mechanical, fabrication, electrical and paint work on all areas of the steel and aluminium yacht, which was first launched in 1999 by Halter Marine and was last refitted in 2008.

Ferdi Heymann, captain of Pangaea was emphatic in his praise of the Gold Coast City Marina team, saying: “What a great example this facility is to the industry on how things should be done! I can highly recommend them to industry peers and look forward to returning in the near future. Everyone really made us feel at home and welcomed. All our wishes were met with a smile and helpful attitude.”

The crew were equally impressed by the facility and its location, with easy access to off-duty entertainment, such as surfing and wine tasting. “Because of the location of the yard this means that everything is accessible and there is a plethora of option available,” Heymann added.

Accommodation on board Pangaea is for up to 12 guests split across six staterooms, while the crew quarters is suitable for a staff of up to 13 people. Her fully-stocked tender garage includes a ten metre catamaran, a seven metre RIB and four compact fishing skiffs.

Power comes from a pair of 1,150hp diesel engines for a top speed of 13 knots. When trimmed back to her cruising speed of 11.5 knots, she boasts a globetrotting maximum range of 18,000 nautical miles thanks to a total fuel capacity of more than 245,000 litres.

Following her refit, Pangaea will now head to Papua New Guinea to continue her worldwide travels, which have previously included marine conservation research in the South West Indian Ocean.