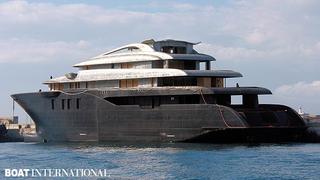 When the large 75m project M25 left Cantieri San Marco last Autumn, little was known about her final destination. The superyacht stood for many months in Gibraltar and was recently towed to Northern Europe where she should be finished in a German yard.

Her interior, initially supposed to be designed by Studio Massari, accommodates 14 guests in seven cabins and crew quarters for 23. Powered by twin Caterpillar engines, her top speed is supposed to reach 16 knots and a cruising speed of 14 knots.

It's difficult to discover why this project left Cantieri San Marco unfinished, with too many conjectures already published. The good news is that this project will now be completed. Our sources told us that M25 is now in Rendsburg, where Lürssen and Nobiskrug have large facilities. Even if nothing is confirmed for the moment, a last minute report said that she's now in front of Nobiskrug.

With the efficiency of both these yards, we can expect to see her (re)launched next year. Stay tuned, we'll provide more details as soon as possible.