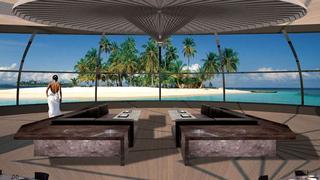 Monaco-based designer Stefano Pastrovich, the man behind Wally's power range, has launched X-Alien 48 metre, a new design concept superyacht about which he is releasing only bare details at present.

The X-Alien concept will stretch from 48 metres to 80 metres and appears to encompass minimalist luxury within an ultra-sleek hull and superstructure, with a go-anywhere attitude. The concept comes with a tagline 'your private terrace on the world'.

Pastrovich’s career started at the Martin Francis Design Studio where he was involved in the design of the 57 metre SenseS. Subsequently Kush Yachts founder Claus Kush commissioned him to design and develop the 104 metre Le Grand Bleu. In 2000, Pastrovich was appointed Chief Designer at the Wally style office where he worked on the entire Wallypower range, the 47, 64, 73, 118 and the most recently launched 55 Wallypower. In 2005, Pastrovich decided to open his own design studio but he continues to work on the styling of Wally’s motoryachts.

The designer says, "Simple shapes are my driving force, which finds therein the essence of the elegance of my projects."