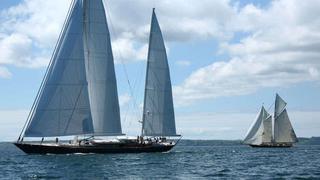 The 2014 Pendennis Cup kicked off in Falmouth, UK, on Tuesday, 27 May, and Boat International brings you reports live from the racecourse.

At the briefing for the first race in the 2014 Pendennis Cup, Race Officer Peter Craig sensibly announced an hour’s postponement, and this allowed a gentle sea breeze to fill in and provide excellent sailing conditions for the 10 competing yachts in the Pendennis Cup fleet, racing in the flat water and sunshine of Falmouth Bay.

The six boats in the Pendennis Division – each rated in accordance with the International Super Yacht Rule - sailed a 17 mile course, and the aptly-named Santa Cruz 70 Breakaway (21.3m) pulled further and further away from the rest of the fleet in the latter part of the race. She eventually finished almost half an hour before the second boat, the Pendennis-built ketch Christopher (46m). After the handicaps were adjusted, Breakaway’s lead was reduced and another ketch, the Hoek-designed Velacarina (26m), was elevated to second. Breakaway’s owner, Mike Webb, says his Falmouth-based boat was designed for stronger winds, and he was delighted with the win. ‘I didn’t really expect to do that well today against boats with longer waterlines,’ he tells me, ‘It was very pleasing’.

Both of the competing two-masted gaff schooners – Mariette (42m), which has raced in all three previous Pendennis Cups and won it in 2012, and the newly restored Kelpie of Falmouth (25m) – are in the same ownership. Mariette’s defence got off to a disappointing start, however, with a fourth place on corrected time, just over a minute ahead of her smaller sister ship.

In the Little Dennis Division for smaller yachts rated under IRC, defending champion Firebrand (13.1m) – owned and sailed by Ed Dubois – finished first and also won on handicap, with the Holman sloop Cerinthe (13.1m) second. ‘A glorious sail,’ says Dubois. ‘I just hope we can keep it up’.